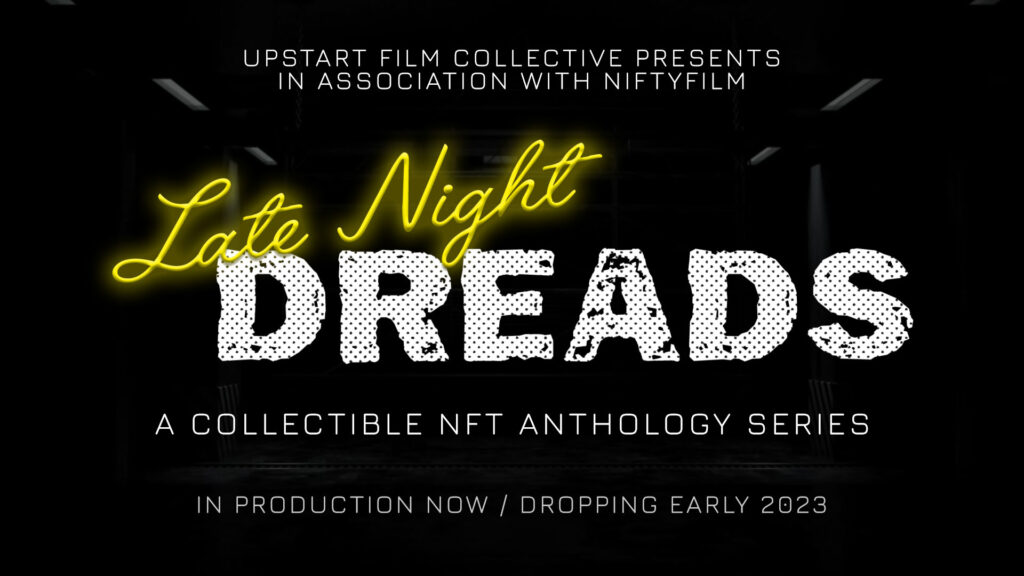 The stories are told in new and unique ways that you can collect and trade, at a price everyone can afford. And as we add value and utility to the scarcest episodes in the collection, rest assured that LATE NIGHT DREADS will entertain you like never before and for a long time to come.

LATE NIGHT DREADS are 15-20 second micro-episodes, or “Dreads.” Releasing every 3-4 months on OpenSea, Rarible & LooksRare on the Ethereum blockchain, each drop will consist of 6 episodes available to collect. For our genesis drop each episode will have a base version limited to only 15 editions for collectors of all budgets to enjoy.

There are 2 blue & 2 red tint variations, a 1/1 Retro Rewind, and a 1/1 Silver Screen edition. All versions come with access to a private Discord channel on NiftyFilm where you can swap stories and talk DREADS with your fellow fans and collectors.

The variations come with exclusive bonuses, including the opportunity to have your work featured as an official episode, celebrity cameos, equity sharing, future whitelists and more custom smart contract capabilities coming soon!

Limited to only 15 editions, the base episodic version of LATE NIGHT DREADS contains the show itself in its primary completed form.

You’ll have access to a private Discord channel where you can connect with other collectors, talk about the show, swap stories and trade for your favorites!

For those who have multiple base Dreads, you’ll also be eligible for exclusive airdrops with rarities, bonus content and whitelisted access to future NiftyFilm shows!

After 6 months in release, we’ll move the oldest episodes to catalog status on the Tezos blockchain at a reduced price. These Dreads will be standalone episodes, content only, with no additional access.

If you enjoy the show and want to be more involved in the LATE NIGHT DREADS community, consider one of our stylized variations limited to only 2 editions each.

In addition to everything you get with the base episodic, you’ll also have access to exclusive extended versions and rare variations, and the opportunity to pitch your story ideas to the community.

We’ll make an official Dread from the best ones and you’ll get a base copy for free!

Blue not your favorite color? We also offer these limited editions in a red tinted version. Choose the color you like best!

A throwback to the vintage age of baseball cards, these variations pay tribute to the 1962 Topps set, which has a well-known error where some of the cards were printed with a green tint. These cards are still highly-sought after 60 years later!

With the new age of web3 here, we pay homage to the days of collectibles past!

For the discerning collector, we offer these rarest Dread variations. Choose the VHS themed Retro Rewind Edition, or if classic celluloid is more your thing, select the Silver Screen Edition.

You get all the benefits of the base and color editions, plus the opportunity to write or star in an upcoming episode.

Are you an artist? Remix, reuse and create derivatives of your Dread and monitize our content with full commercial usage rights and a Creative Commons CC4 license! Or contribute your art to a future episode and be eligible for a portion of its revenue!

You’ll also have access to exclusive extended versions of your Dread, where we give you and you alone a little longer peek at the action. We think you’ll want to stick around.

But the true value in these 1/1’s will be in the celebrity cameos and equity sharing that we’ll be adding in the future as the show matures.

With the support of the early sales of these rarities, we’ll be reaching out to name talent in the world of film and TV, offering celebrity cameo variations of the base LATE NIGHT DREADS, exclusively for our 1/1 collectors.

As the show continues to grow, we also plan to deploy a custom smart contract which will enable us to retroactively introduce equity sharing in LATE NIGHT DREADS and other future NiftyFilm shows.

This will ensure we continue to deliver value and community to our most ardent supporters for years to come!

Never before seen in the world of live action entertainment, LATE NIGHT DREADS introduces the concept of rarity traits to film!

As an additional level of scarcity, we’ll be assigning traits to each of the Dreads within a drop such as:

Collect the Dreads you like the best or try for the rarest ones! You decide! 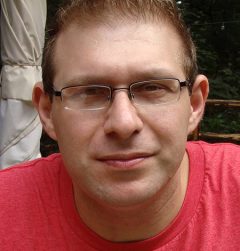 JASON CHARNICK is an award-winning filmmaker & New Yorker now living in Southern California. He has been in the entertainment industry for almost 25 years, including a dozen as part of Adam Sandler’s Happy Madison Productions family. He has worked with clients such as Universal, Warner Bros., Fox, A&E, Comedy Central, Viacom & more.

His first feature, the critically acclaimed documentary GETTING OVER, premiered at the prestigious SXSW Film Festival in 2018, and he currently hosts a filmmaking & mental health podcast called HEAD ABOVE WATER.

NiftyFilm is also home to his personal NFT film project, THE ABSENCE IS ALWAYS PRESENT. 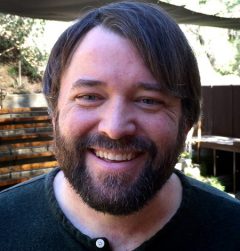 CHRISTOPHER W. JONES is a multi-hypenate talent like few others in the industry. A graduate of the Boston University School For The Arts, Chris has been acting and doing voice-over work professionally for a quarter century.

A long-time member of the Theatricum Botanicum in Topanga Canyon in Los Angeles, California, Chris stars in a number of Shakespeare stage shows a year, and also teaches a children’s class in how to understand and properly perform the Bard.

Currently performing loop group and background walla for a number of Netflix and other network shows, you’ve probably heard his voice countless times! 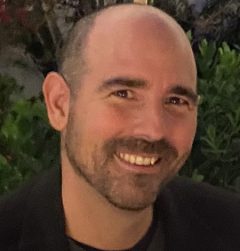 AndyK is a musician and producer that resides in Long Beach, CA. He is one of the most prolific creators working today, putting out seven albums this year alone and with over fifty releases to his credit.

He plays keyboards and more in the band, Los Angelenos, and produced the newest album by spoken word artist and rapper, Sam Corea. His music is based in sampling from his extensive record collection and ability to play multiple instruments.

He also hosts a music podcast about the Northern Virginia scene of his youth called Jams for Man.

When we hit 25% of sales for each of the 5 rarity levels, we will start airdropping bonus content to token holders.

At 50% of sales for each of the 5 rarity levels, series 2 of Late Night Dreads gets greenlit and we start planning our next 8 episodes!

When we sell three quarters of each of the 5 rarity levels, we’ll send some more dreadful bonus content your way!

Late Night Dreads series 1 is a total sell out! We celebrate, we airdrop some bonuses and we get back to work!

To be announced in the coming days. Purchase our current and upcoming teasers and promotional materials to secure your pre-sale slot. There will only be a limited number of slots available.

Put 100% of proceeds of genesis drop back into production. Release second drop of eight Dreads, continue building out Discord server, begin reaching out to name talent for cameos in the 1/1 variations. 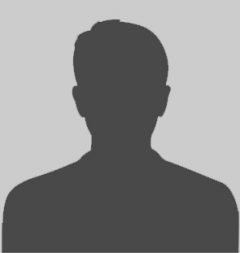 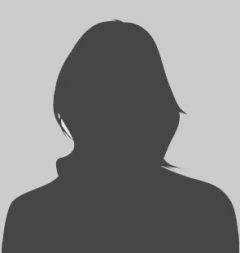 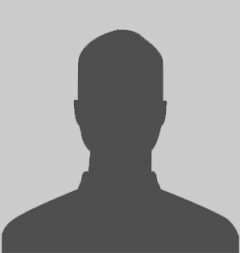 Our third actor is really good at what they do! Stay tuned for more exciting casting and celebrity cameo announcements coming soon!

TELL ME AGAIN ABOUT THE STORIES.

Two sentence horror has been a popular genre of short stories on the internet going back decades. With unique audiovisual content, we're adapting some of the most popular ones that have endured for years from anonymous or unknown origin and creating new tales to terrify you as well!

Ethereum and blockchain technology establishes a whole new paradigm of digital collectibility and Late Nights Dreads pays homage to the history and longevity of the baseball card world by patterning the show after a card set. There are differing tiers, or "parallels," each rarer than the last.

Unlike physical collectibles, however, each level of rarity gives you additional access to exclusive bonus content and other NiftyFilm projects available nowhere else.

One of the best things about the DVD/Blu-ray era of cinema before the onset of streaming was a special edition overflowing with bonus content. Late Night Dreads brings back this tradition in web3! Depending on the rarity level of your Dread, you'll be eligible for airdrops with alternate edits, extended versions, full length music tracks and more! The more episodes you collect, the more extras you'll get!

HOW OFTEN ARE NEW DROPS?

We are currently planning on releasing at least 5 different seasons of Late Nights Dreads to be dropped every 3-4 months. Each season will have 8 episodes.

I HEARD A RUMOR ABOUT TEZOS DROPS. IS THAT TRUE?

During the heyday of the video rental market in the United States in the 80s and 90s, there was once a concept known as windowing. That meant after a certain period of time in theaters, a movie would then move to VHS and rental market for a few months before finding its way to cable and eventually, network TV after a few years.

Similar to the windowing concept of the past, after our third drop, we plan on releasing catalog titles from the first drop and making them available on Tezos at a discount. These episodes are the equivalent of watching a blockbuster movie on TV, and offer no additional utility or benefits.

HOW DOES THE EQUITY SHARING WORK?

To be honest, we don't know yet. Late Night Dreads is first and foremost a new kind of collectible film series, with no guarantee of future monetary value but we do hope to entertain you for years to come. The road to revenue sharing is a long and complicated one, with various rules, regulations, and legalities across differing jurisdictions.

When the day comes that we can effectively offer equity and revenue sharing, the blockchain gives us the ability to retroactively airdrop distributions to our earliest supporters. Just another reason to get in on Late Night Dreads early.

WHO ARE YOU AGAIN?

Our entire core creative team is doxxed, and we proudly sign our name to everything we do. NiftyFilm was founded in 2020 by filmmaker Jason Charnick, a 25 year veteran of the entertainment industry. Jason is an editor and has been a post supervisor at Framework Studio, part of the Happy Madison family of companies for well over a decade. He has recently worked on campaigns for Batman, Bullet Train, Thor Love & Thunder and Jordan Peele's Nope. In 2018, he premiered his feature documentary, GETTING OVER, at the SXSW Film Festival in Austin, TX, USA in the Documentary Spotlight category.

Christopher is an active voiceover actor, with multiple Netflix credits to his name. He is also a member in good standing at Theatricum Botanicum, one of the premiere Shakespearean theater companies in the United States.